Thanks go to Cass Thompson (Ranchland Utilities) and former board members David Pfeifer and Teri Buhl, for making the following MolzenCorbin Engineering report and Infrastructure Task Force minutes available to residents (June 2013 will be posted soon):

Secret negotiations were held with Ranchland Utility in October 2014 to discuss a potential bond issue to “help” the associations purchase and own irrigation infrastructure.  Who participated in these meetings?  Warren Thompson will make a presentation at the RVSA Annual Meeting November 18th.  Bonds are one method that Boards use to avoid special assessments and/or increases, which push costs onto residents through increased property taxes or other means.   In a meeting on Nov. 4th, Warren stated that no decisions on financing options will be taken until the engineering study is finalized (target is December) and all parties understand future costs.

The Ranchland Utility Company processes both sewage for the College District area (regulated by the PRC) and Class III non-potable irrigation water for Rancho Viejo (unregulated).  Basically, Ranchland owns the main lines and pumps up to the “T-valves” and each association owns the subsidiary lines that water the common areas and easements.   In 2013, a group of engaged residents had been working with R.U., Directors Buhl and Pfeifer, and the North Association to understand the total costs of maintaining and upgrading these systems for the future, educate residents, and explain potential assessment increases until the community was mature enough to handle management of the system.  In November 2013, President Thompson disbanded the Infrastructure Task Force, claiming that it’s work was done.  Directors Buhl and Pfeifer disagreed and submitted a preliminary report to the BOD in January 2014, but the BOD declined to review or act upon it.  President Thompson then decided that the Landscaping Committee and Community Manager would discuss irrigation issues with R.U. despite having no experience in engineering or infrastructure planning.

Ranchland Utility Company subsequently requested cost figures for an engineering study – when the figures were first presented, the RVS BOD refused to pay a portion of the costs for the study (in a split vote).  In July, since negotiations were stalled, R.U. declined to renew it’s irrigation water treatment contracts with the North and South Associations and is currently providing irrigation water on a month-to-month basis.

At the September BOD meeting, President Thompson announced that R.U. has offered to help the Associations obtain some type of bond, so we can takeover management of our irrigation water needs.  (Isn’t that considerate of them?)  In addition, a second vote on the Engineering Study was taken, which passed, and all three associations will pay ~$5500 each for the study.  The president also announced that the 2015 budget contains no assessment increase – despite the fact that the associations will probably need to hire an operator/manager to coordinate irrigation needs and scheduling for the whole community – and split the cost.  No details on how this would be achieved were forthcoming.

Here are a few questions for the Board of Directors:

– Why was the Infrastructure Task Force disbanded when negotiations were heading in a win-win direction?  This and the initial refusal to fund the Engineering Study were factors in precipitating Ranchland’s refusal to renew contracts.

– Why do the president and several directors keep running on a platform of “no assessment increases” when it is clear that our community needs to plan for the future NOW?  Fiduciary duty also includes appropriate increases to handle community growth.

– When will we finally have a reserve study to responsibly plan future outlays?

To view the report below, please click on any slide: 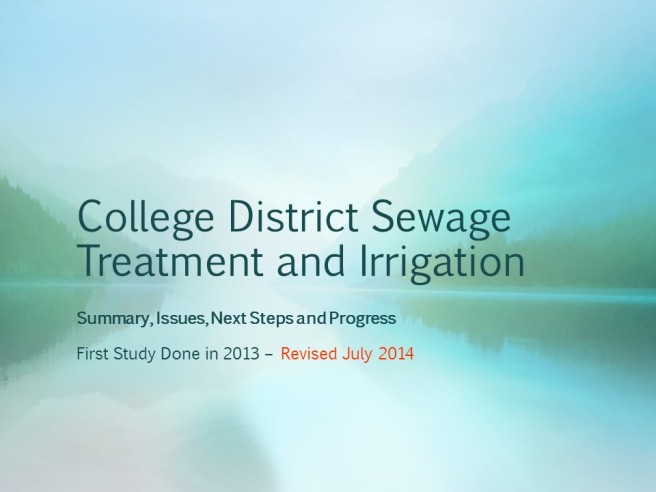 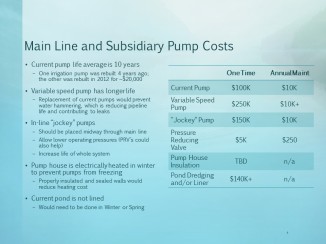 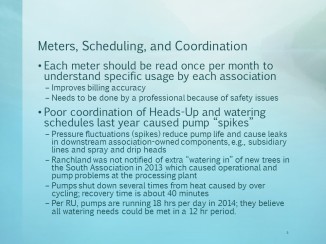 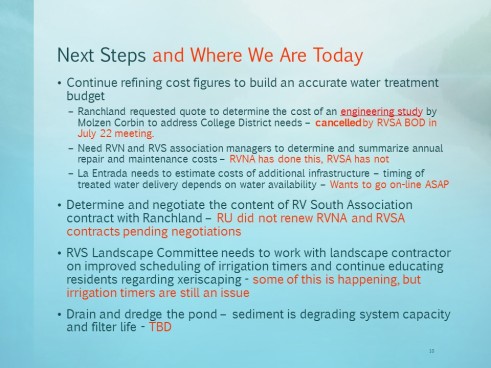 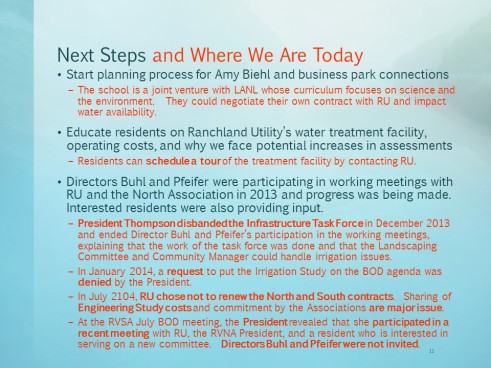 Feel Free to Leave a Reply or Comment Cancel reply